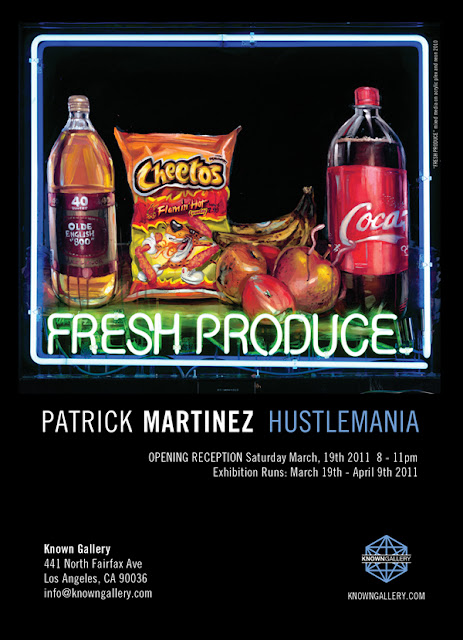 Opening March 19
Known Gallery is pleased to present Hustlemania, a solo exhibition by Patrick Martinez. Based in Los Angeles, Martinez is a mixed media artist who uses everyday people and objects as his muses,
revealing their beauty through his work. He blends harsh realities with doses of humor or fantasy, imbuing each piece with poignant social commentary. The title of the show was inspired by a neon piece Martinez completed in 2008 titled
“Selling Out is the New Keeping it Real,” which articulated Martinez’s thoughts about art and the economy at the time. “The recession was in full swing and people were desperate for money,” the artist says. “Everyone was on hustlemode— and still are. When I was creating in the studio, this concept kept coming up: the idea of the paper chase, chasing the dream and all that. When I started looking at the body of work as a whole, I saw that theme binding everything together as a cohesive collection.” Hustlemania will feature more than 20 new works, including large-scale paintings, sculpture and Martinez’s signature neon pieces. The exhibition showcases his breadth as an artist: from Martinez’s urban take on stilllife
paintings—in which fruit baskets are replaced by 40 ounces and Cheetos—to the very personal portraits of his mother and father.
“This is my strongest solo show to date,” Martinez sums up. “I took my time, had fun, struggled and produced honest work at my own pace. I believe all of that will show at the gallery.” 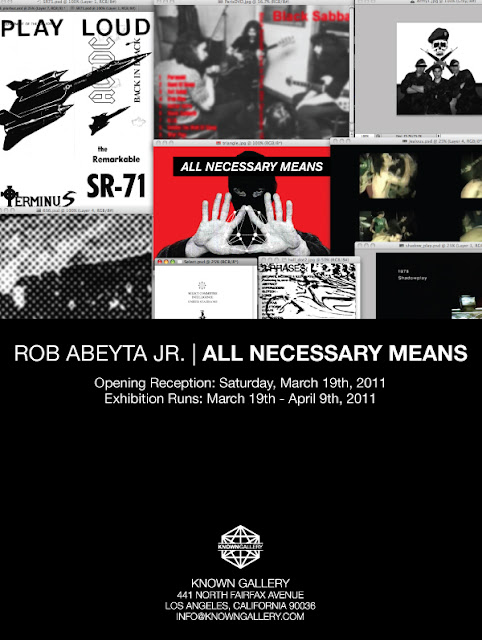 Robert Abeyta Jr. - ALL NECESSARY MEANS
Robert Abeyta Jr. is a painter, creative director and founder of the Los Angeles based creative applications group, DualForces.
Prior to forming DualForces, Robert was the Art Director for Stussy, Inc. Robert also worked with NIKE as the Senior Product Designer heading up a line of sneakers & apparel focused on the American West Coast style. His past works have included collaborations with Spike Jonze, French Director and Academy Award Winner Michel Gondry, LEVIs, Undefeated and numerous music packaging designs ranging from the seminal punk band LOS CRUDOS,
to The Transplants, to LA hip hop legends MACK 10, Cypress Hill and DJ Quick. Other works include the design of numerous skateboards and apparel while working as an Art Director for Fourstar Clothing at the Girl Skateboard Companies. His artwork has been exhibited and collected extensively throughout the United States and Europe.